The FIFPRO World Players’ Union, Building and Wood Workers’ International (BWI), International Domestic Workers Federation (IDWF) and Ulula are breaking ground at the FIFA World Cup with a digital platform designed to advance migrant worker’s rights. This platform will facilitate access to information, training, and legal advice and support. The goal is to leave a legacy of improved worker’s rights that outlasts the spectacle of the World Cups.

By 2019, international migrants represented 78.7% of Qatar’s population, and 95% of the labour force. 45% of migrant workers work in the construction industry. The 2022 World Cup will be the most expensive sporting event ever by a huge margin, but migrant workers there are acutely vulnerable to workplace grievances and exploitation.

Language barriers, worker-paid recruitment and precarious citizenship often make it difficult for migrants to report grievances without fear of reprisal. That’s why Ulula, BWI IDWF and FIFPRO are working in tandem to build a digital platform that will connect workers with the information and advice they need so they can be aware of their rights and access the support they need in their own language, across multiple communications channels, to access the country’s labour justice system.

Worker-centricity is a Cornerstone of the Platform

The platform is the result of regular design sessions with international trade union leaders. Functions of the app were built together with construction and domestic workers who would benefit from it. With the platform, worker voice is assured as worker voice is embedded by design.

The platform is managed by BWI and IDWF with the support of their network of trained paralegals, and it allows users to remain anonymous until they decide to disclose their identities. To foster education among its users, the platform will host resources, FAQs, surveys and information about employment rights that workers can access at their fingertips.

You Can’t Ask for Help without a Voice

By definition, migrants all over the world and in Qatar are drawn from a diverse pool of countries. Language barriers often render migrant workers invisible. If they’re unaware of their rights or unable to communicate about their concerns, the new set of rights they have will remain only on paper and won’t make a difference in their working lives.

The digital platform has seven languages available from pilot: Arabic, Bengali, English, Filipino, Hindi, Nepali and Urdu. Workers can also use WhatsApp to talk to language-agnostic, BWI and IDWF representatives who are ready to answer queries, give advice and support them to file complaints to the country’s labour justice system if need arises. The BWI and IDWF team will answer preliminary questions to reassure workers of the validity of their case, and ensure it meets the requirements of the relevant authorities. The platform is more than a sympathetic ear. By acting as a buffer between the worker and the authorities, the platform will facilitate access to justice for migrant workers. The platform will help to identify patterns and collect data, formalise evidence, and promote awareness among the working population.

Migrant workers have always been the most vulnerable to the practice of exploitation in Qatar and globally. Such practice applies to a large range of labour, but it is particularly acute in the construction and domestic work sectors. In Qatar, despite recent improvements, gaps in data collection on work-related deaths and injuries render migrant workers and their conditions even more invisible. International pressure has led to labour reforms in the country, including residential crowding laws in worker camps. BWI, IDWF and the global union movement were part of the collective effort that led to the Kafala sponsorship system’s overhauling in September 2020 to include a higher minimum wage that doesn’t discriminate by nationality, and freedom for workers to change jobs prior to the end of their contracts without consent from their employers. The Qatari Labor Ministry has also stated that workers need not serve their notice period if employers do not fulfil their legal obligations to their employees. However, some, including BWI and FIFPRO, have raised doubts about the reform’s implementation and a decent work legacy from the FIFA World Cup Qatar 2022. 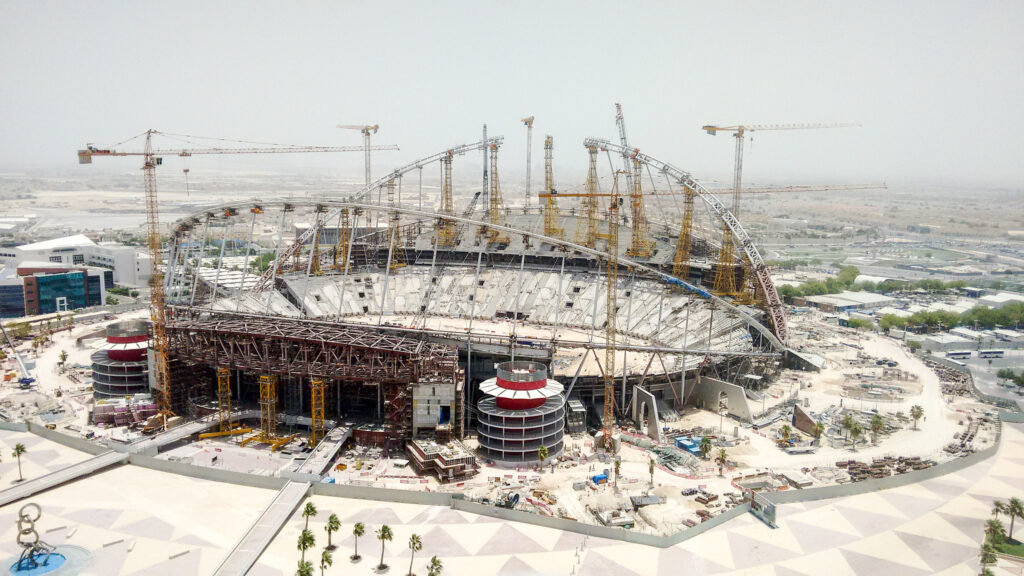 “Renovation of the Khalifa Interational S” (CC BY-NC 2.0) by jbdodane

Qatar is the first Arab Gulf country to allow migrant workers to change jobs mid-contract and the second, after Kuwait, to implement a minimum wage. But workers that are unaware of their rights or isolated from open channels of communication can’t benefit from reforms. The platform will equip workers with the knowledge to exercise their rights and provide them with advice from impartial, expert representatives who have their best interests at heart. At its core is the belief that if workers possess knowledge of their rights, they’re granted the power to voice them.

In educating workers, Ulula, the BWI, IDWF and FIFPRO hope that the platform will have a lasting impact. In the vacuum of an institutional legacy that secures decent work for migrants around major football events, the  platform is the only existing tool run by and for the migrant workers that will serve this purpose. The tool is a bespoke solution, tailored to the needs of the migrant workforce in Qatar, but it’s not tied to a single application or country, it can be exported for use at other sporting events, such as the 2024 Paris Olympics and the 2026 FIFA World Cup in the US, Canada and Mexico, to create lasting human rights improvements.

Pilot project context and background Sedex and Ulula collaborated on a pilot project to see how the deployment of worker voice surveys before onsite SMETA audits could improve the execution of an audit and its output. Beginning in March 2022 and running until July,...